Framework of the project Rendered History is the work with war and post-war trauma of former Yugoslav societies. The project is an example of art that deals with the media, forensic, political and moral identification and presentation of war crimes and the current transitional ideologies of their denial and erasure. The author wish to question how the media and institutions in the post-Yugoslav societies create public space, and thus shape the collective memory. The goal is to work with art as a form of counter public sphere that raises questions of war media propaganda, manipulation, historical responsibility and intellectual engagement.


Posted by vladimir miladinovic at 3:26 AM 3 comments:

Record made on 27.08.2002. in the Ministry of Internal Affairs of Serbia, on the occasion of taking statements from Božidar Protić related to his knowledge of the events related to the conflicts in Kosovo and Metohija in 1999. 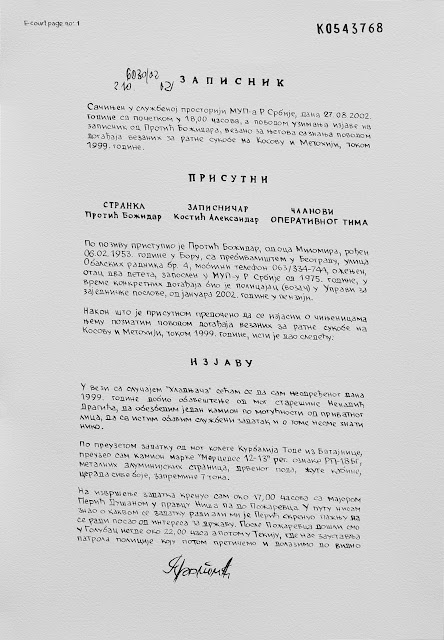 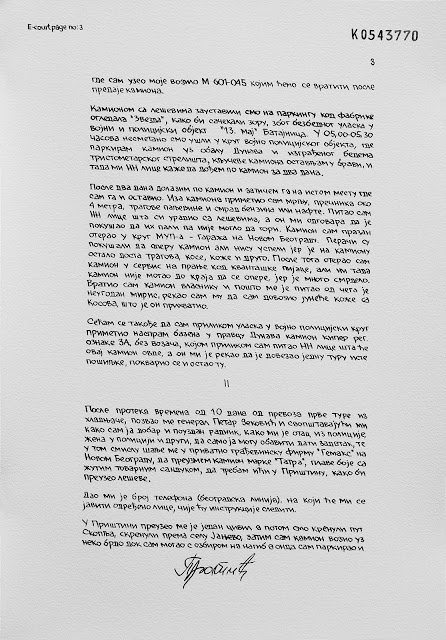 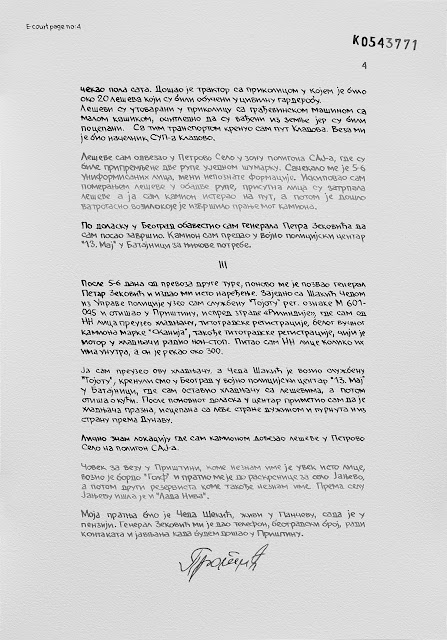 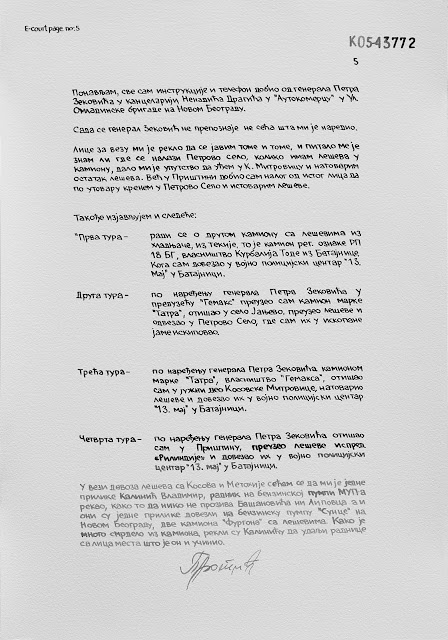 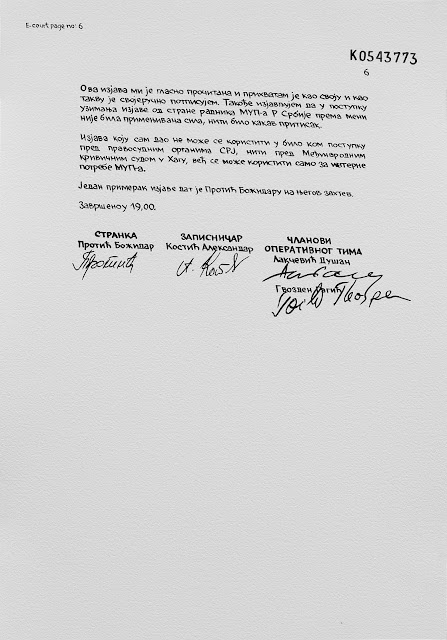 Free Objects centers on the “Free Objects” list: an official document listing the objects found in several mass graves in Batajnica, a suburb of Belgrade. These mass graves, containing the remains of Kosovo Albanians, were uncovered between June 2001 and November 2002, on the training grounds of special anti-terrorist units of the Serbian Ministry of Internal Affairs in Batajnica, 20 kilometers from the city center. During the exhumation a significant number of victims’ personal items were found. Hundreds of items were listed as having been found on bodies or in their immediate vicinity. These were mostly small personal items, but the list also contains body parts and missiles of different calibers. After the forensic examination, all items were listed and the final list was stored in an archive. Free Objects questions what happened to these objects. Even though there is evidence that the objects were subsequently destroyed, we cannot exclude the possibility that some survived. 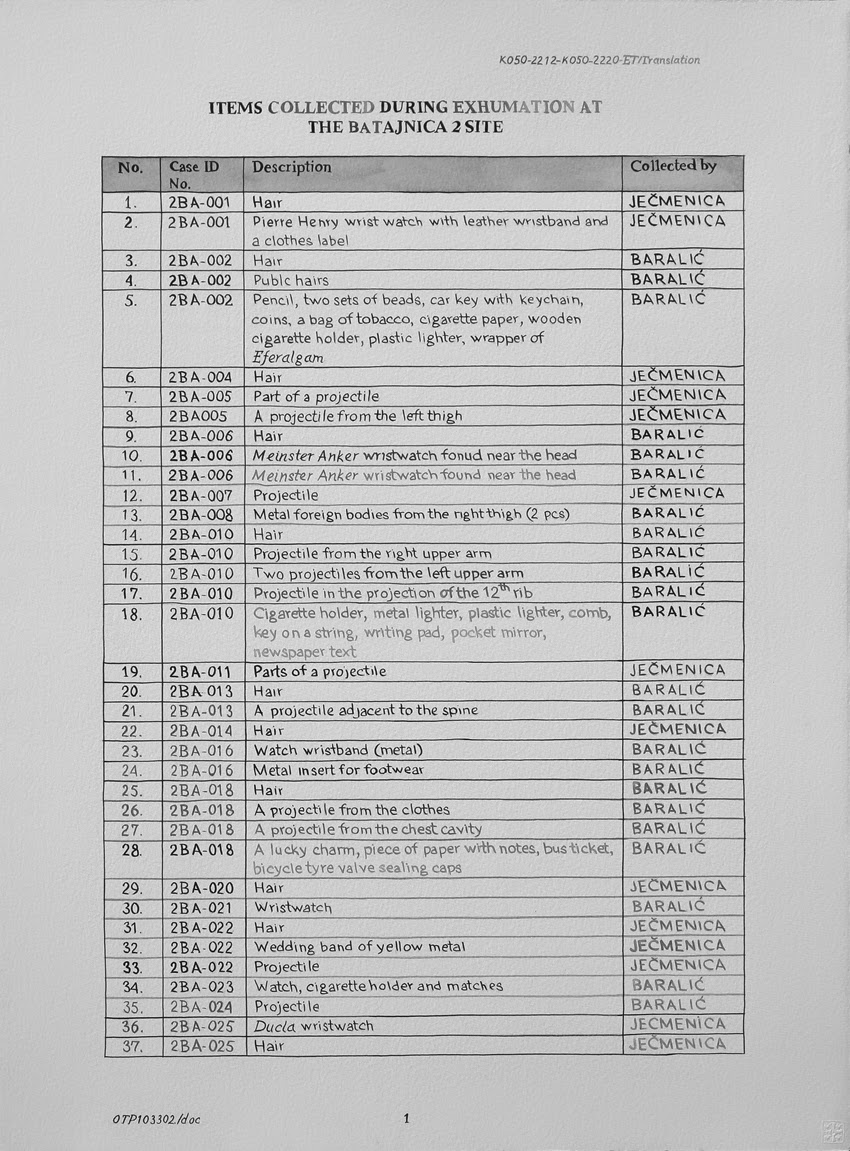 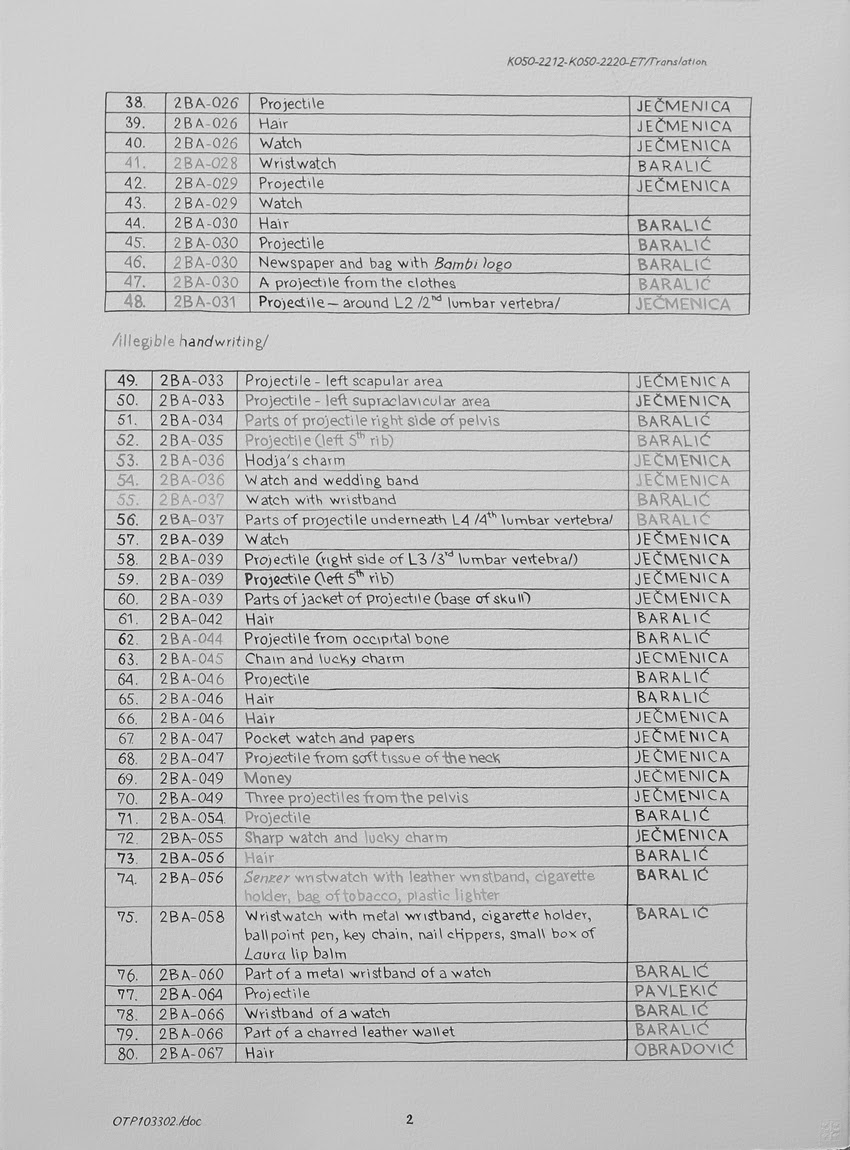 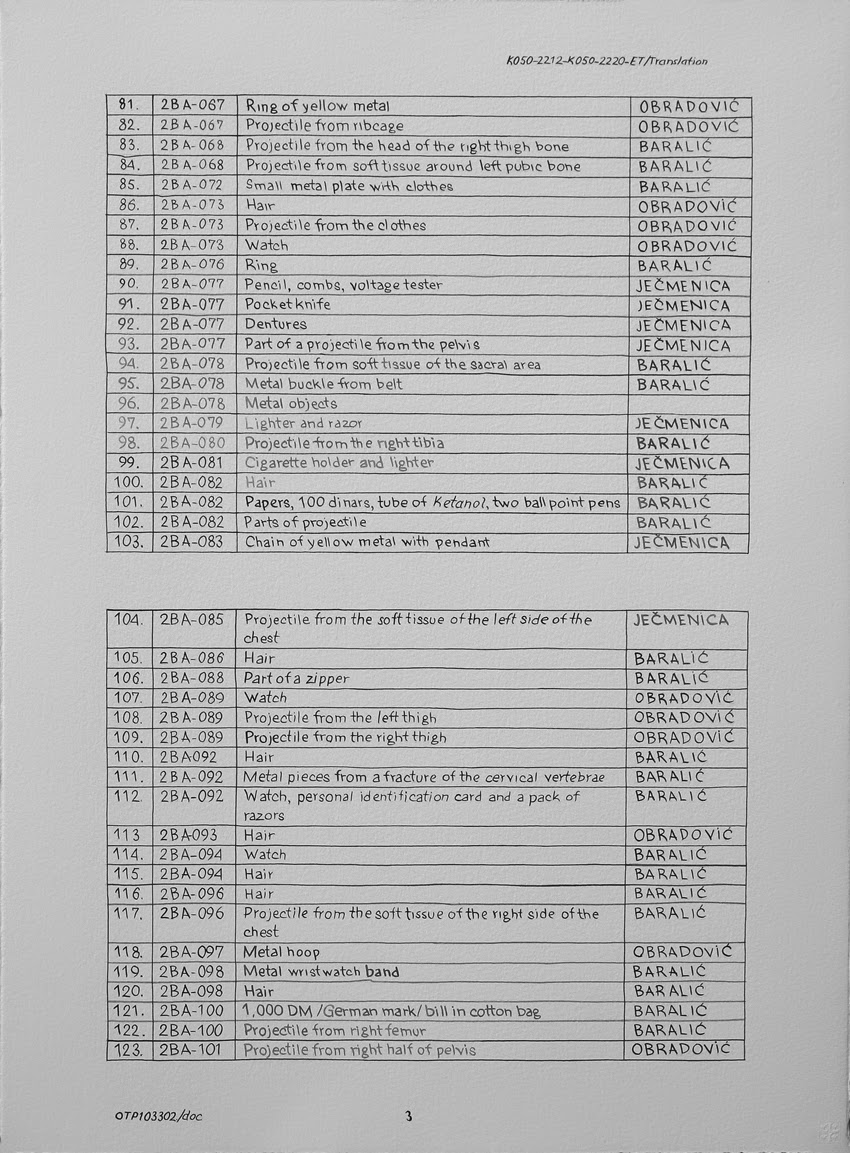 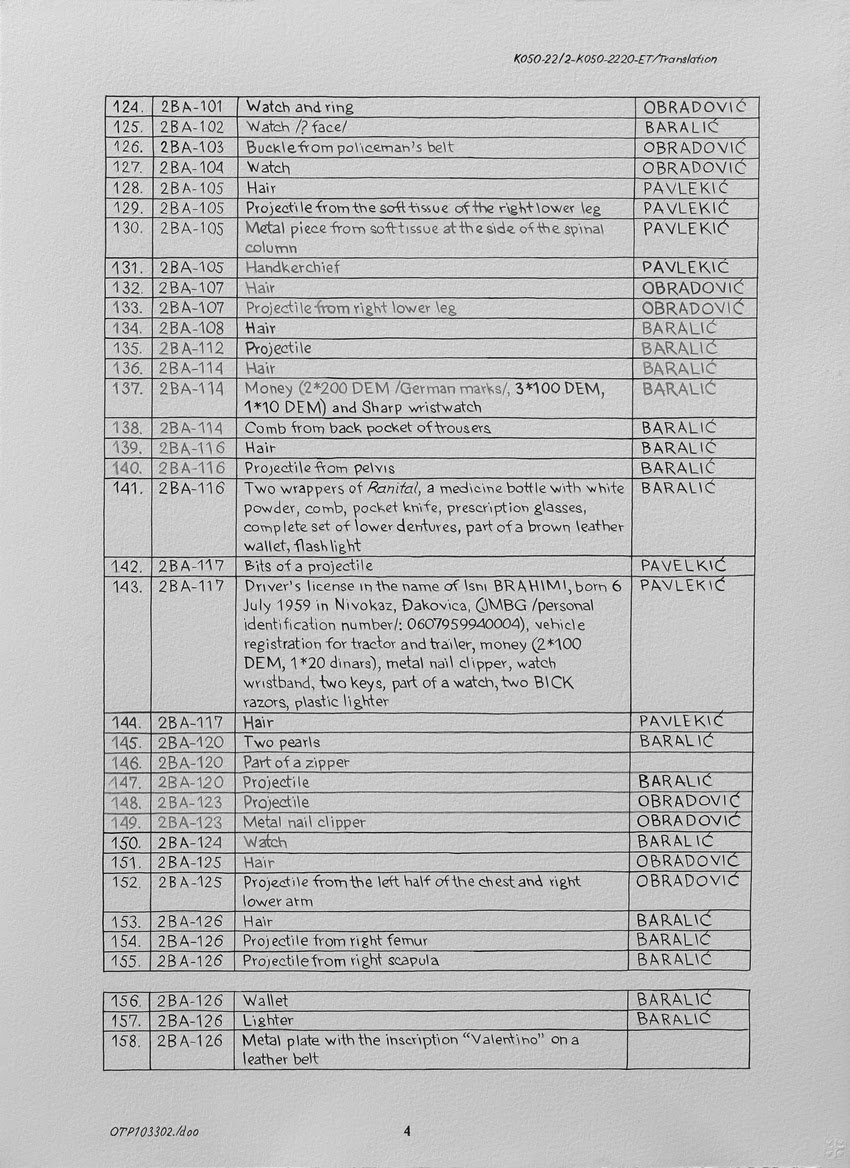 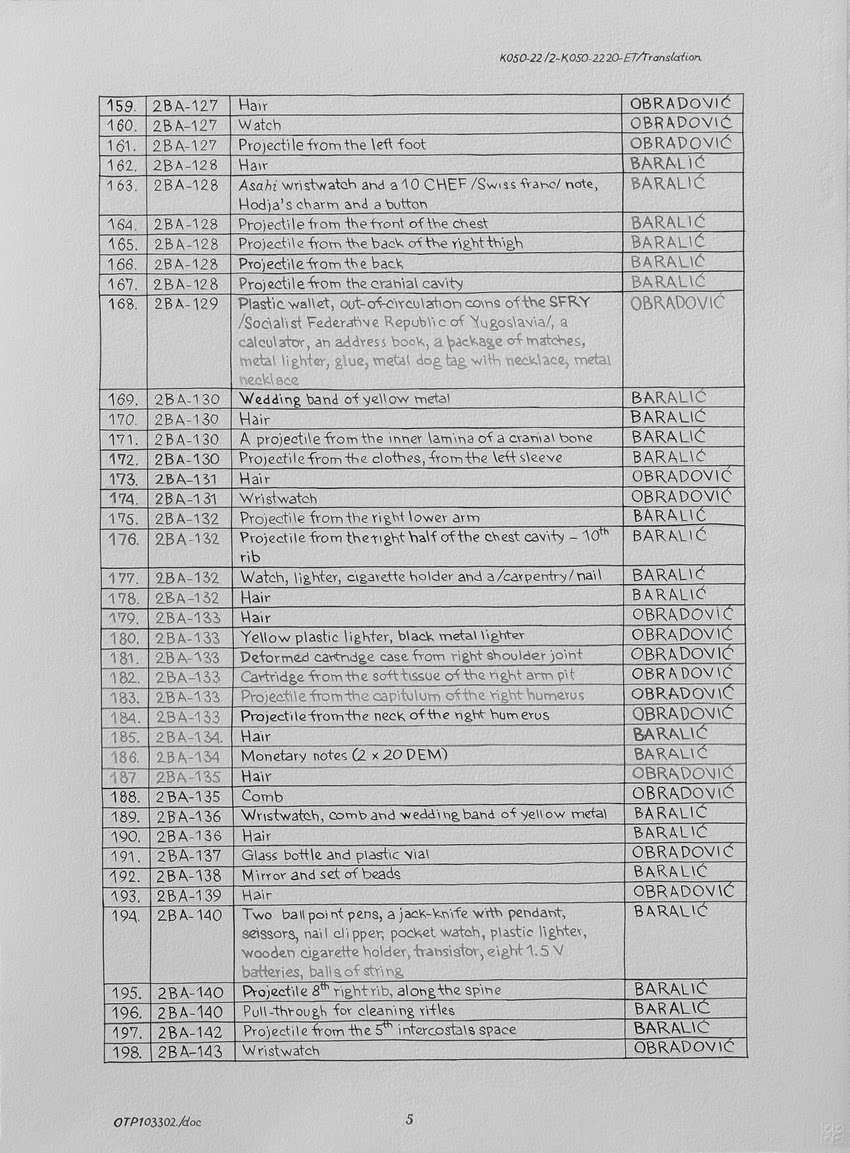 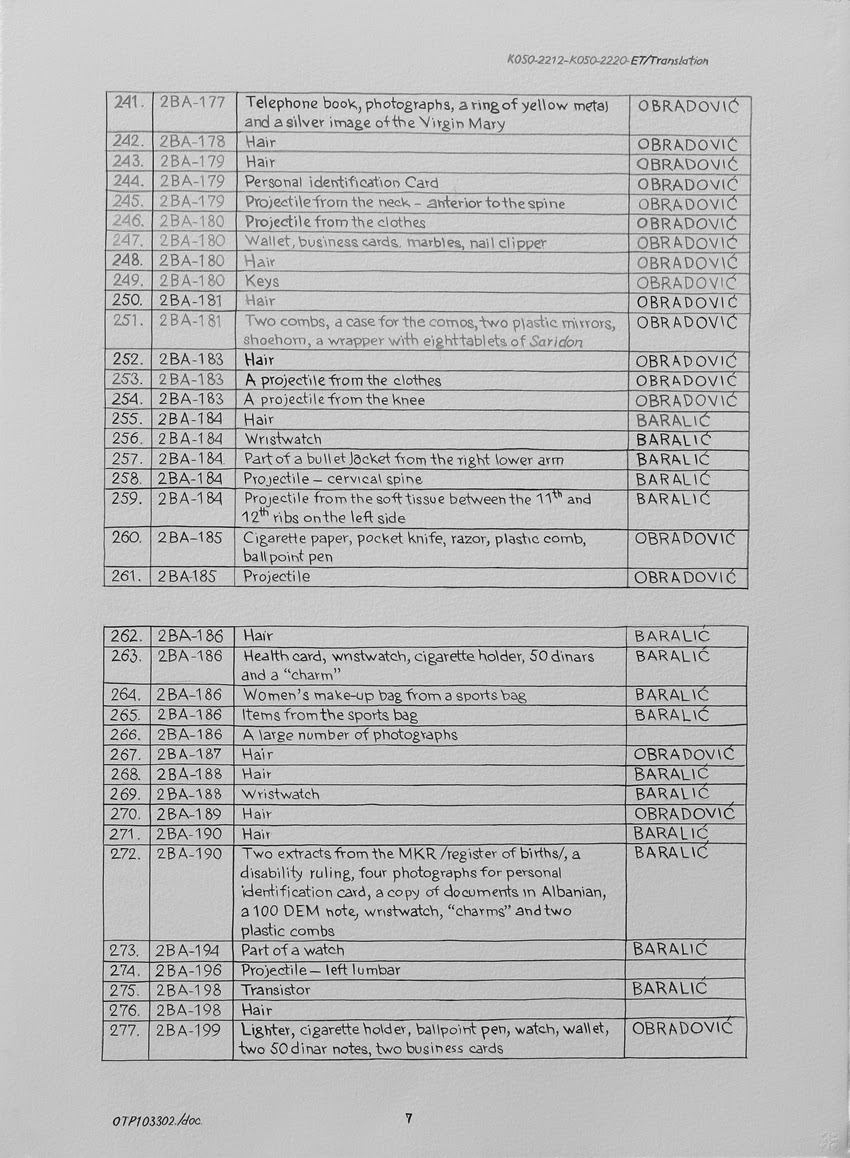 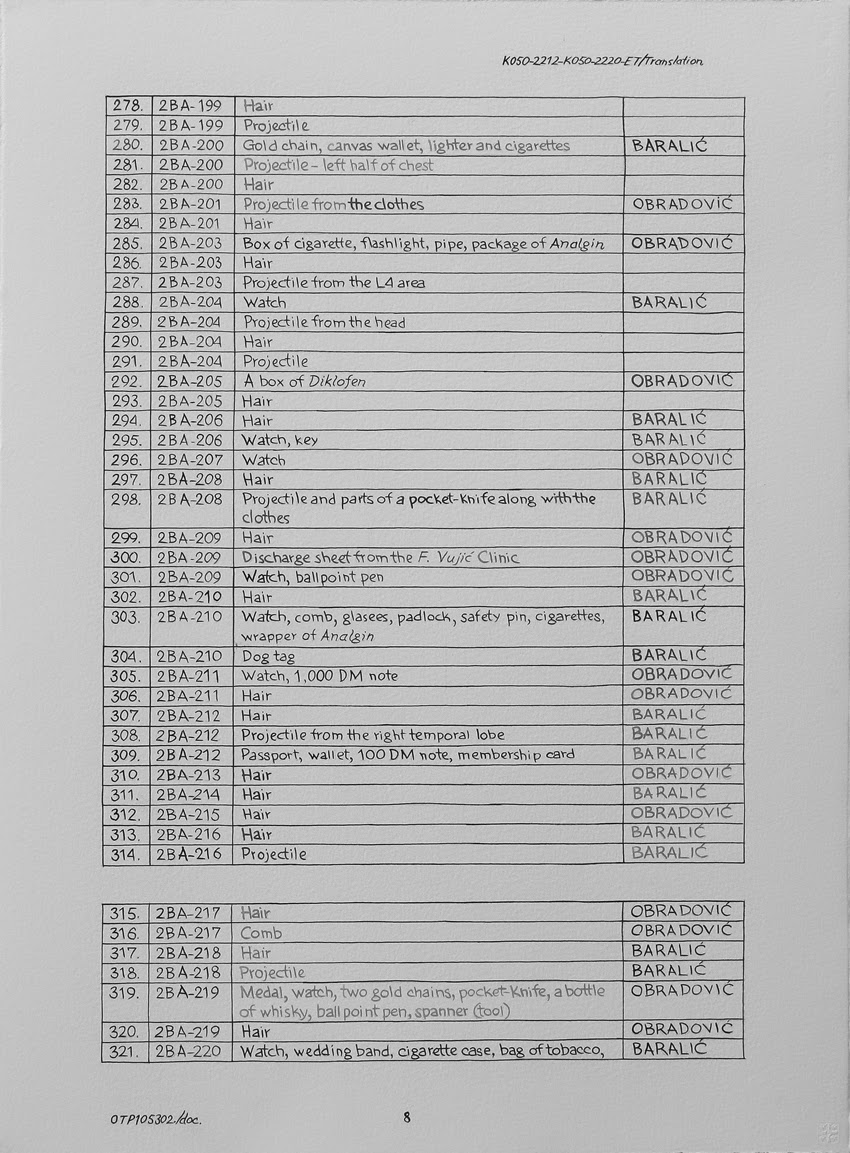 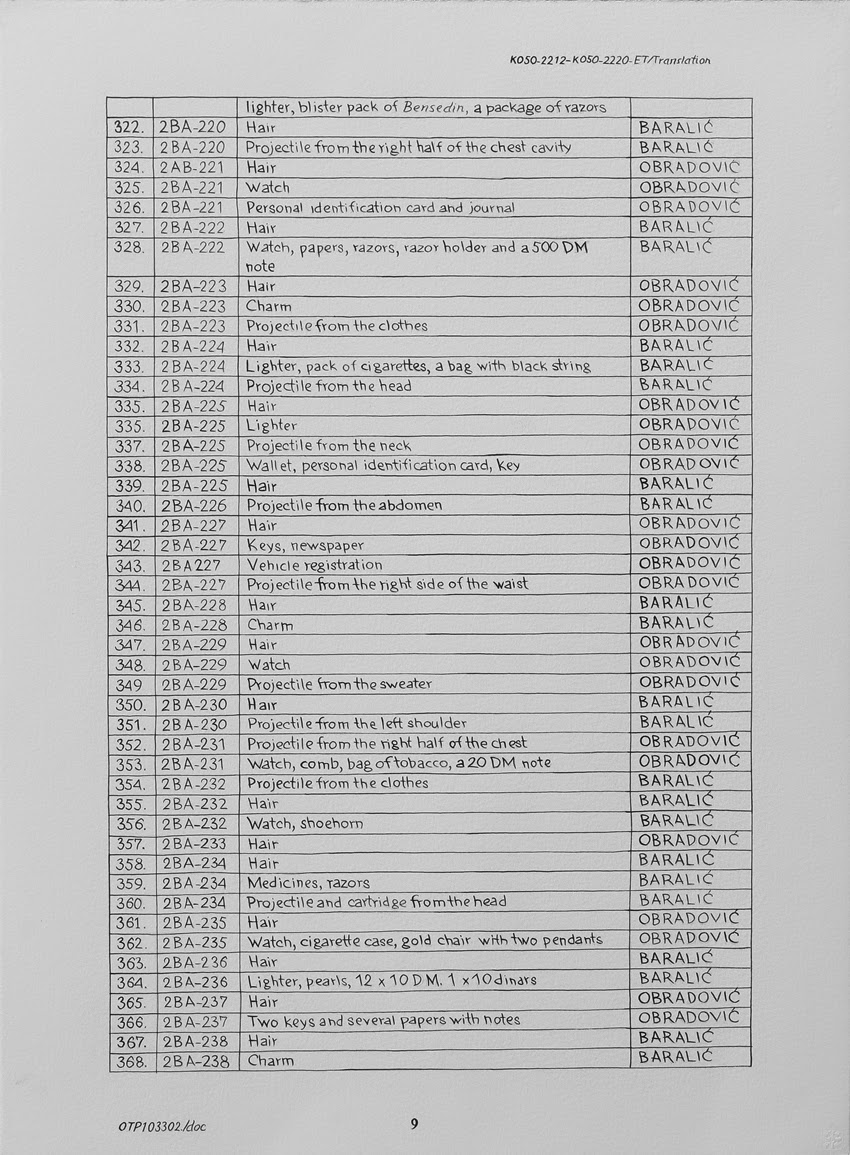 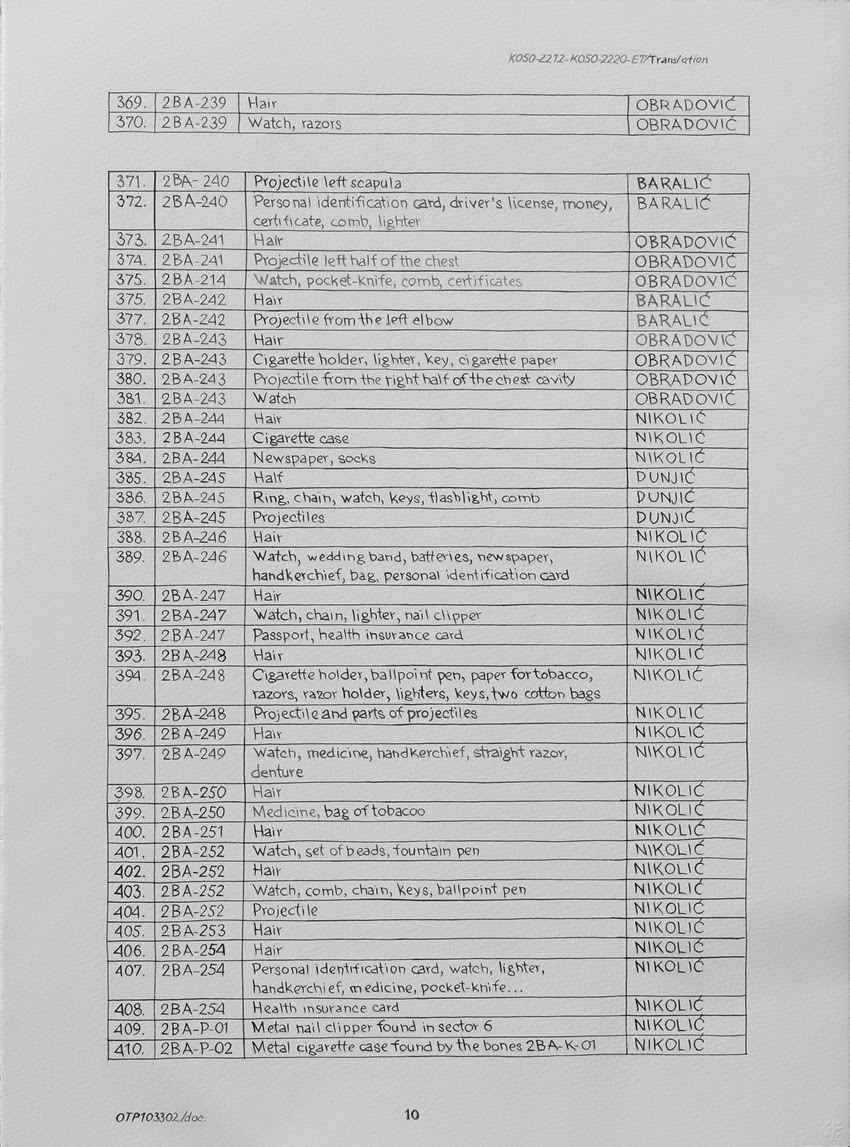 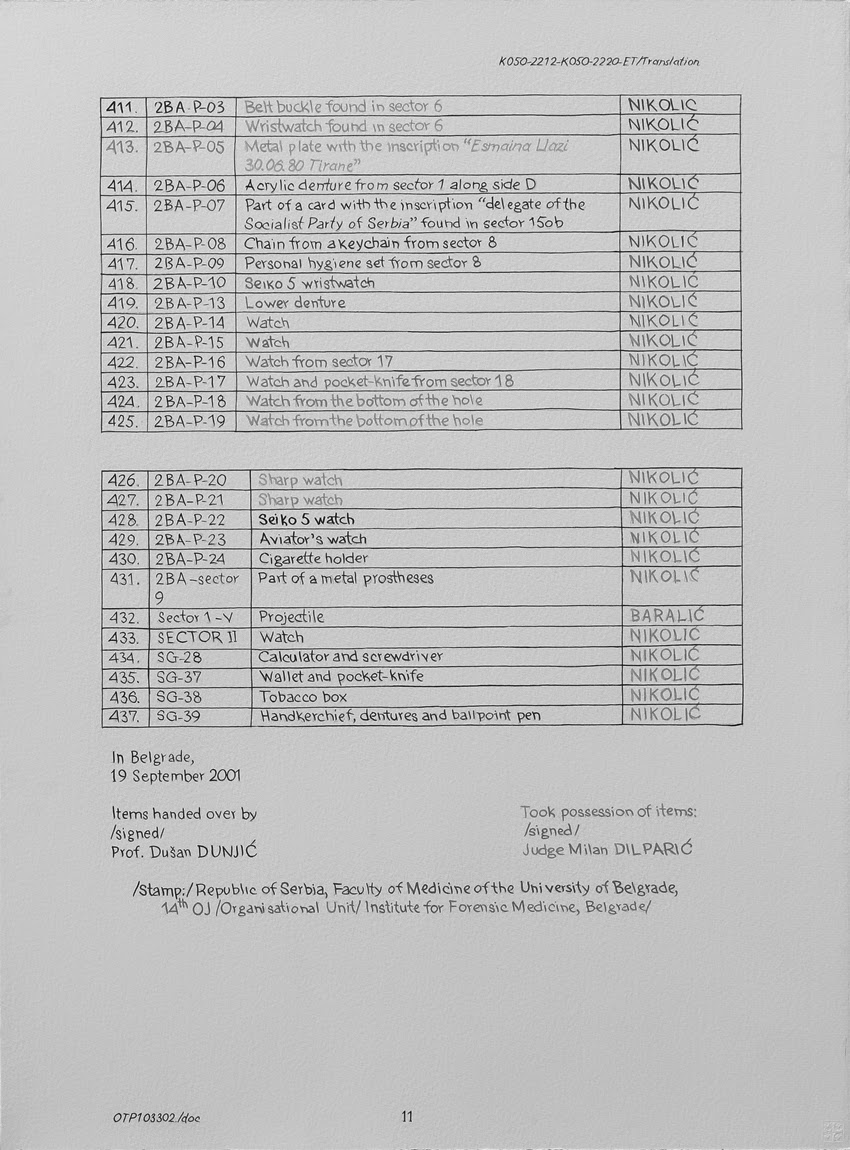 Posted by vladimir miladinovic at 2:47 AM 10 comments:

From June 2001 until November 2002, within the training grounds of special anti-terrorist units of the Serbian Ministry of Internal Affairs in the Batajnica suburb of Belgrade, twenty kilometers northwest of the city center, the existence of several mass graves containing the remains of the bodies of Kosovo Albanians has been revealed.
Ink wash on watercolor paper
Various dimensions
2015 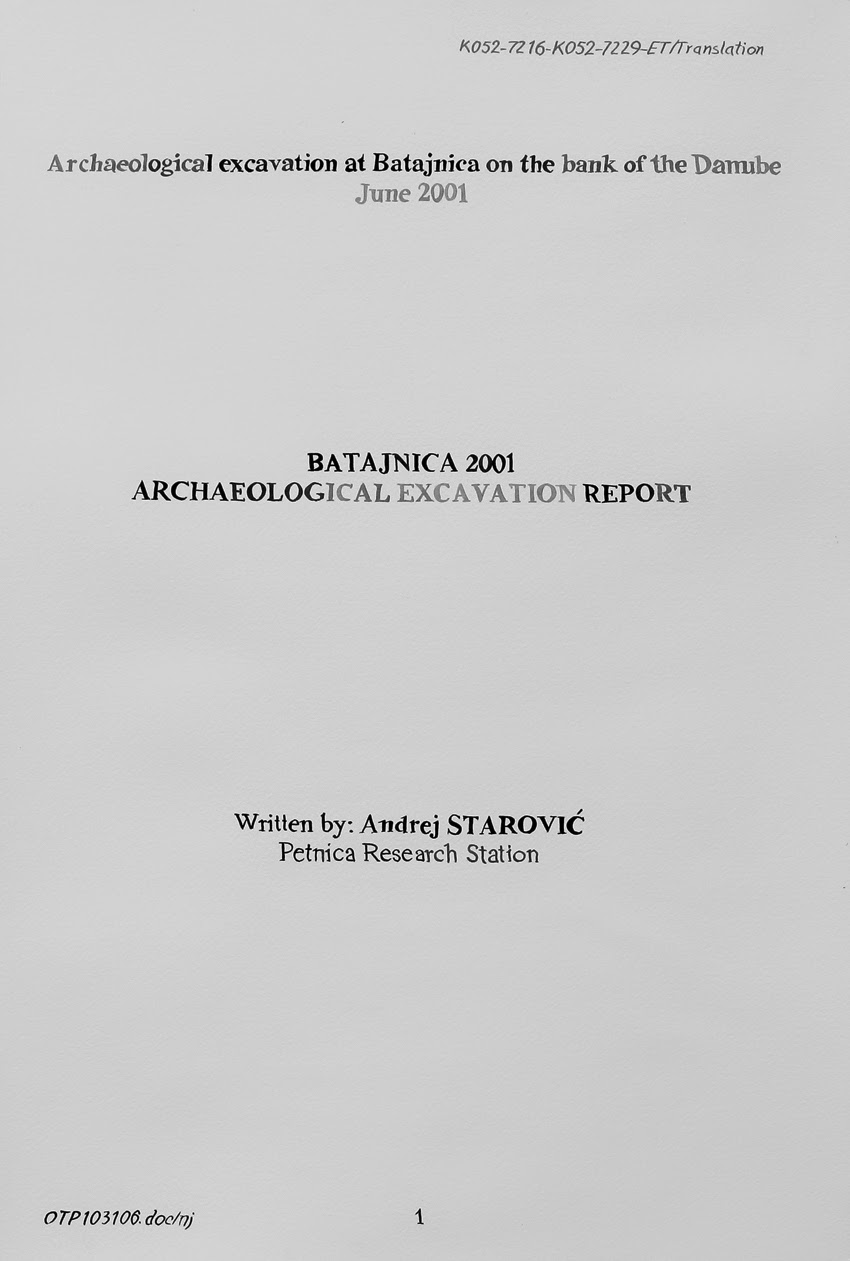 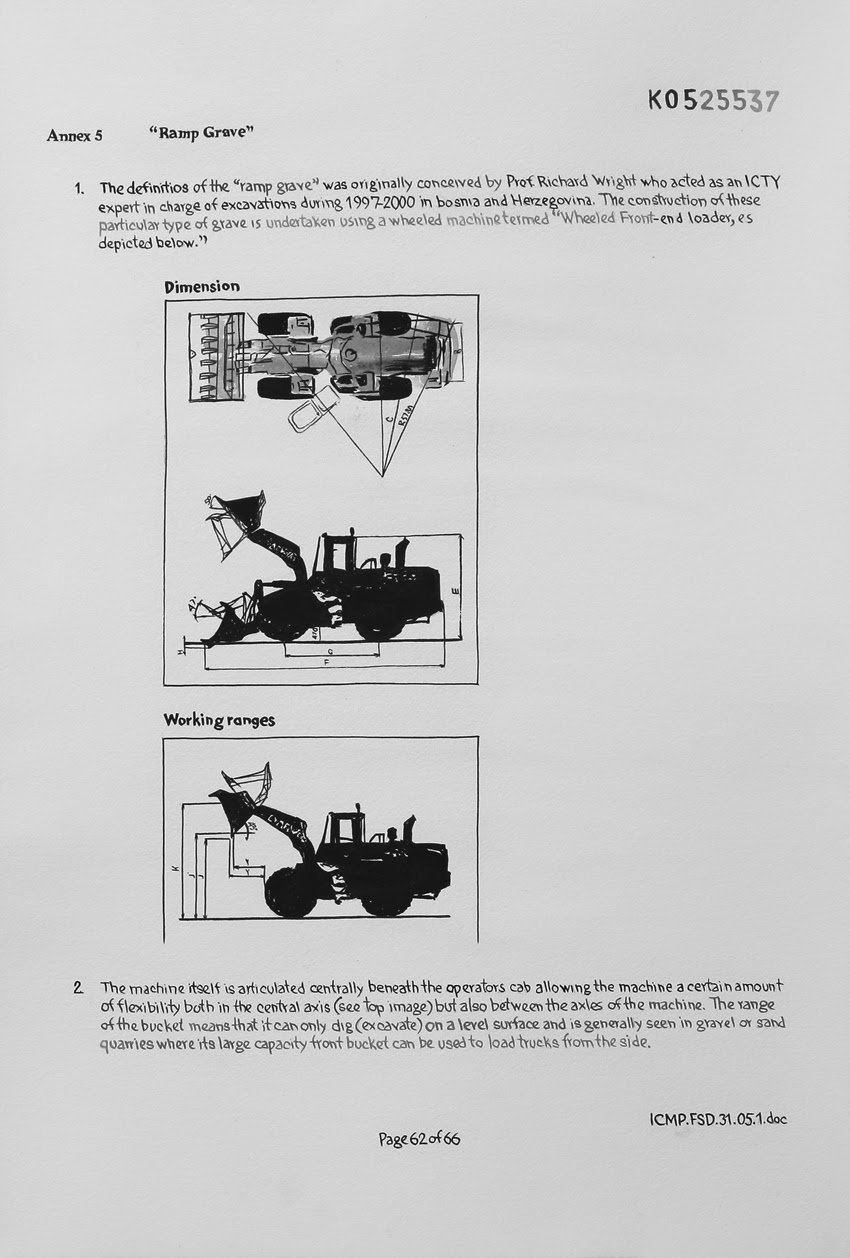 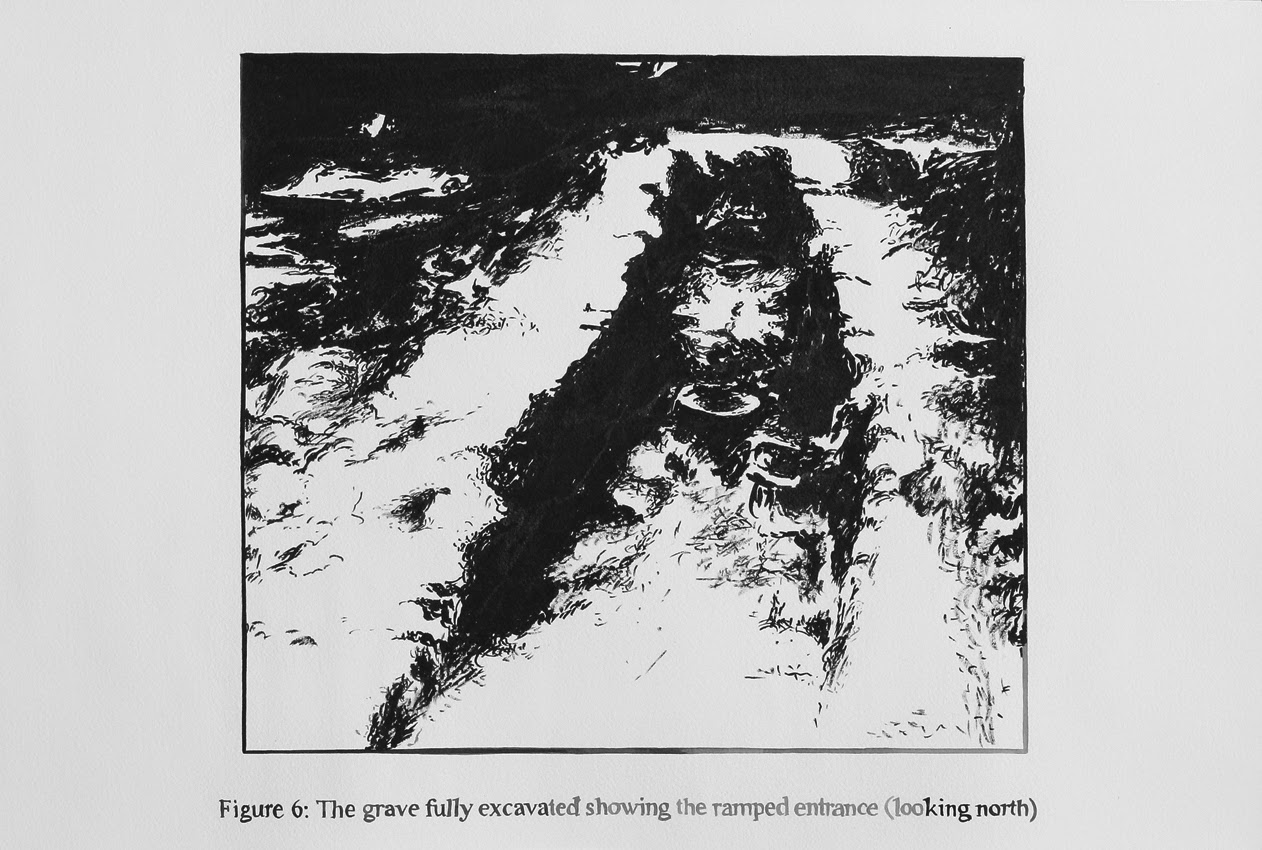 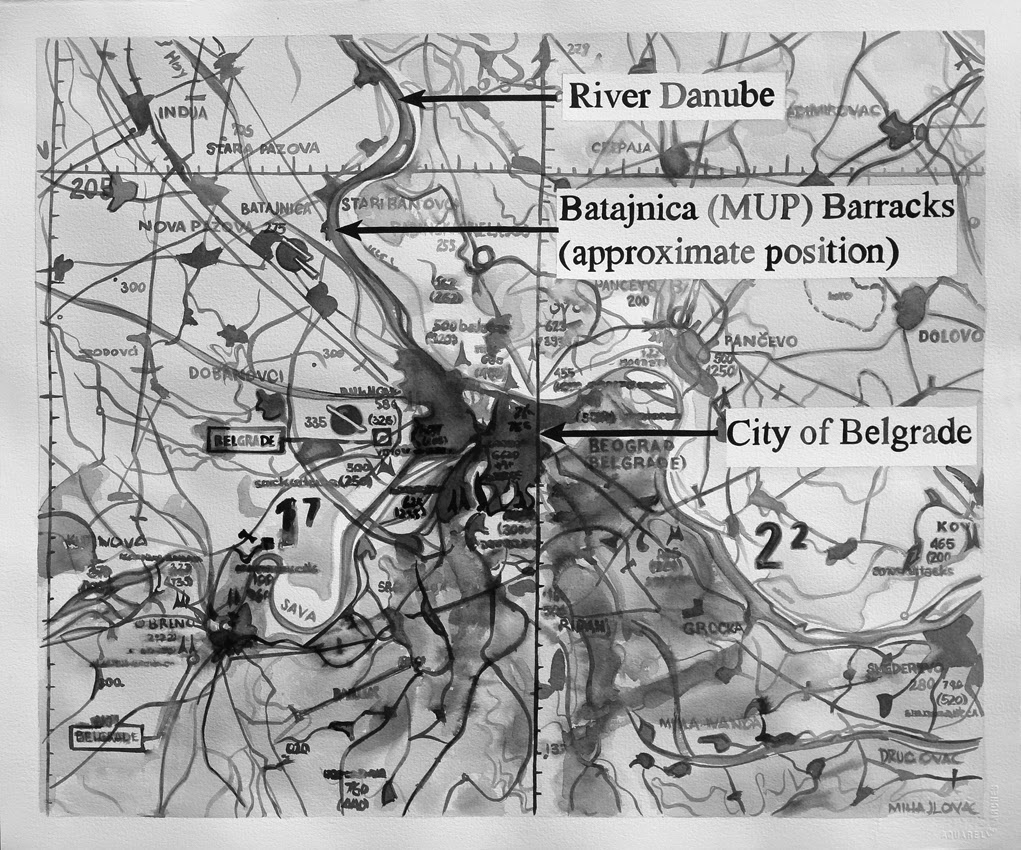 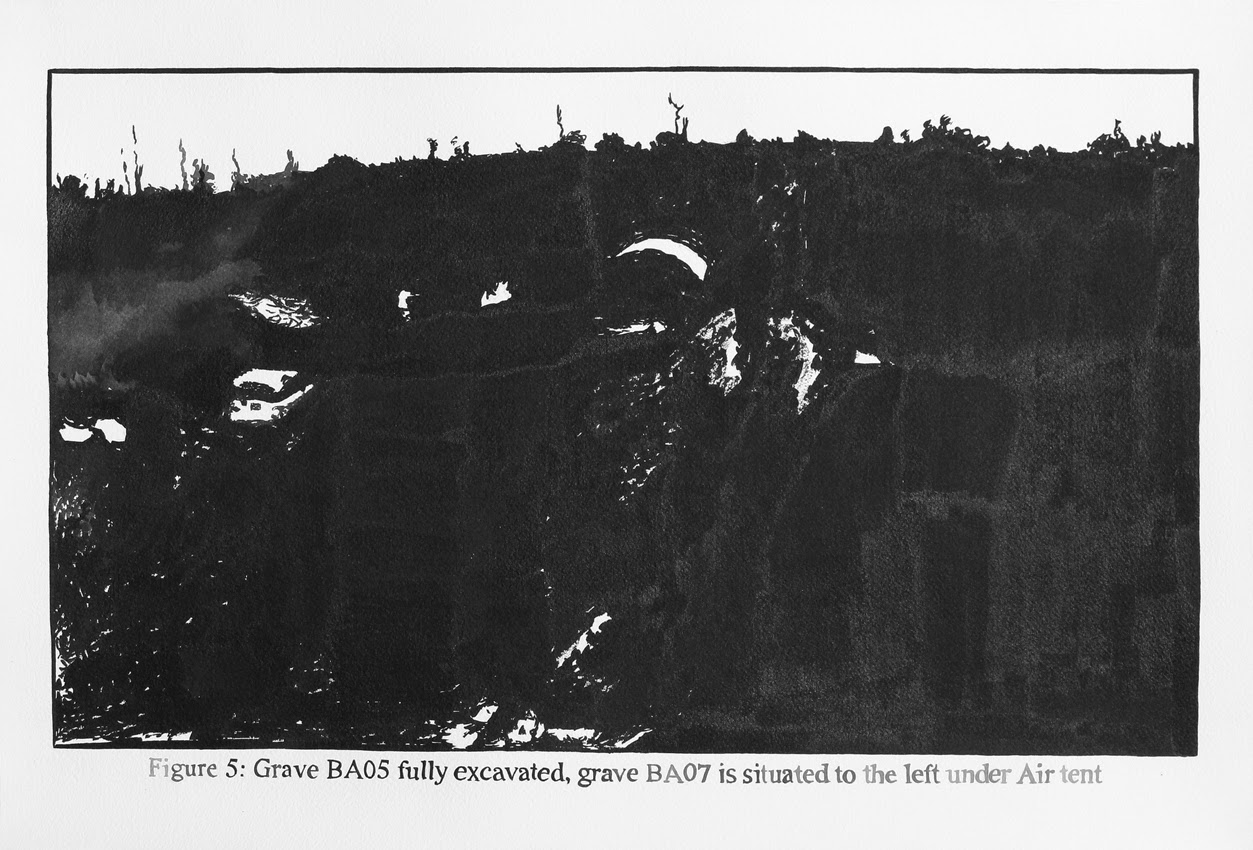 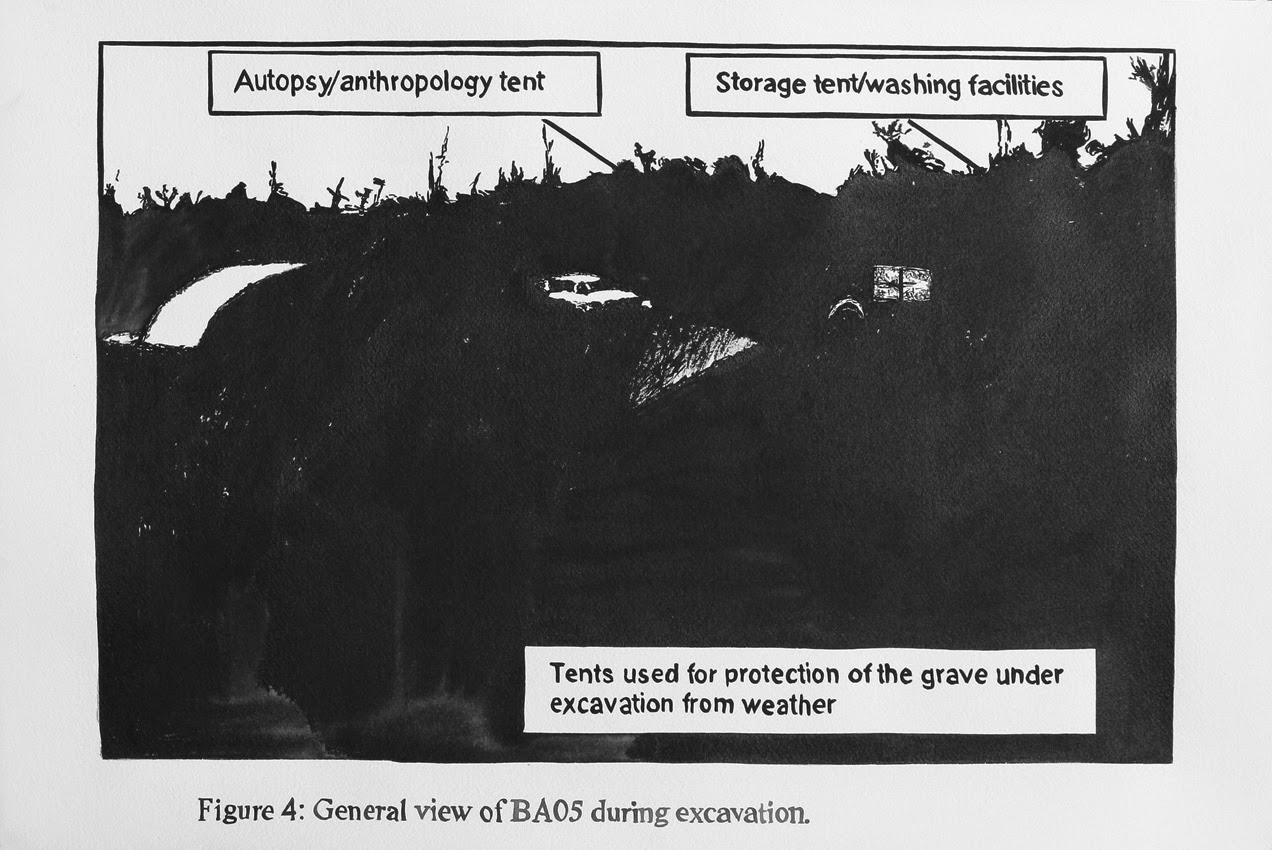 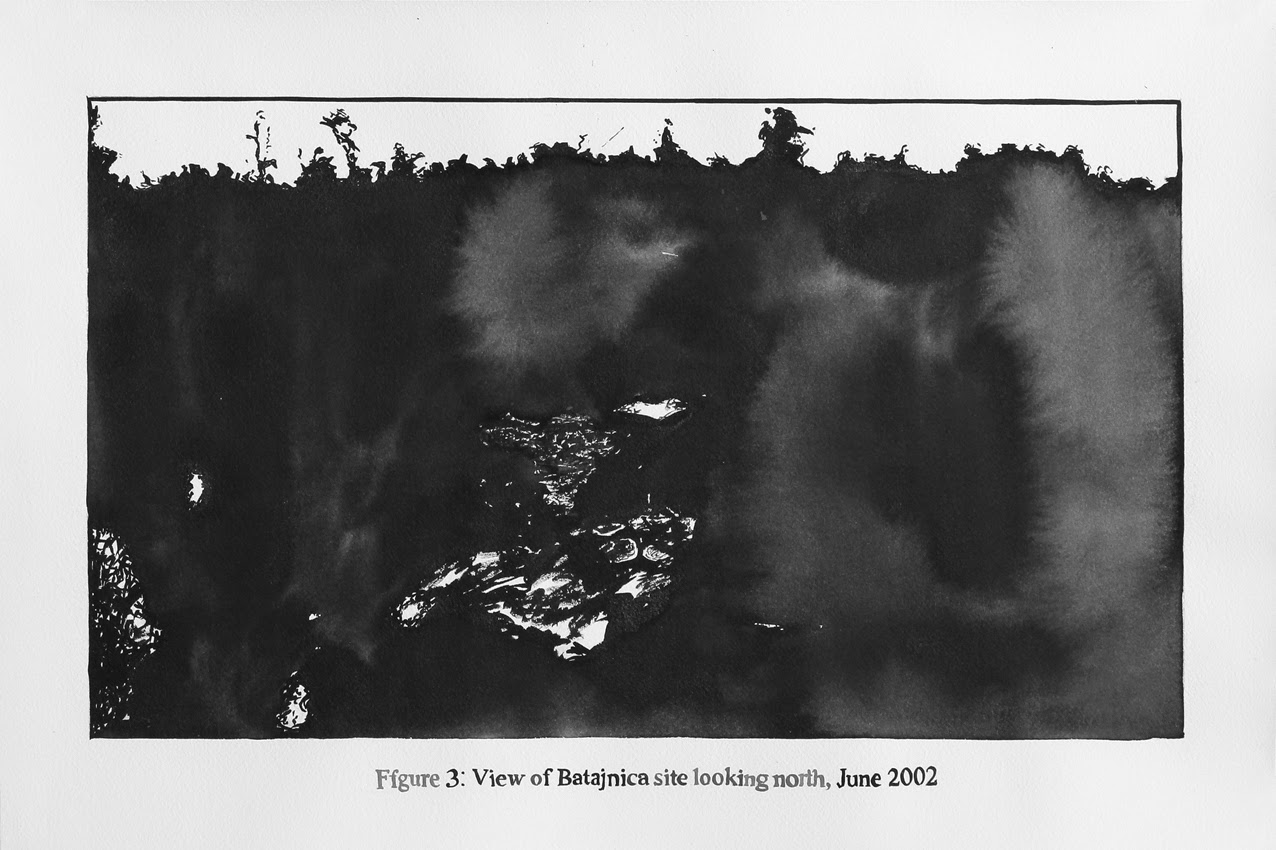 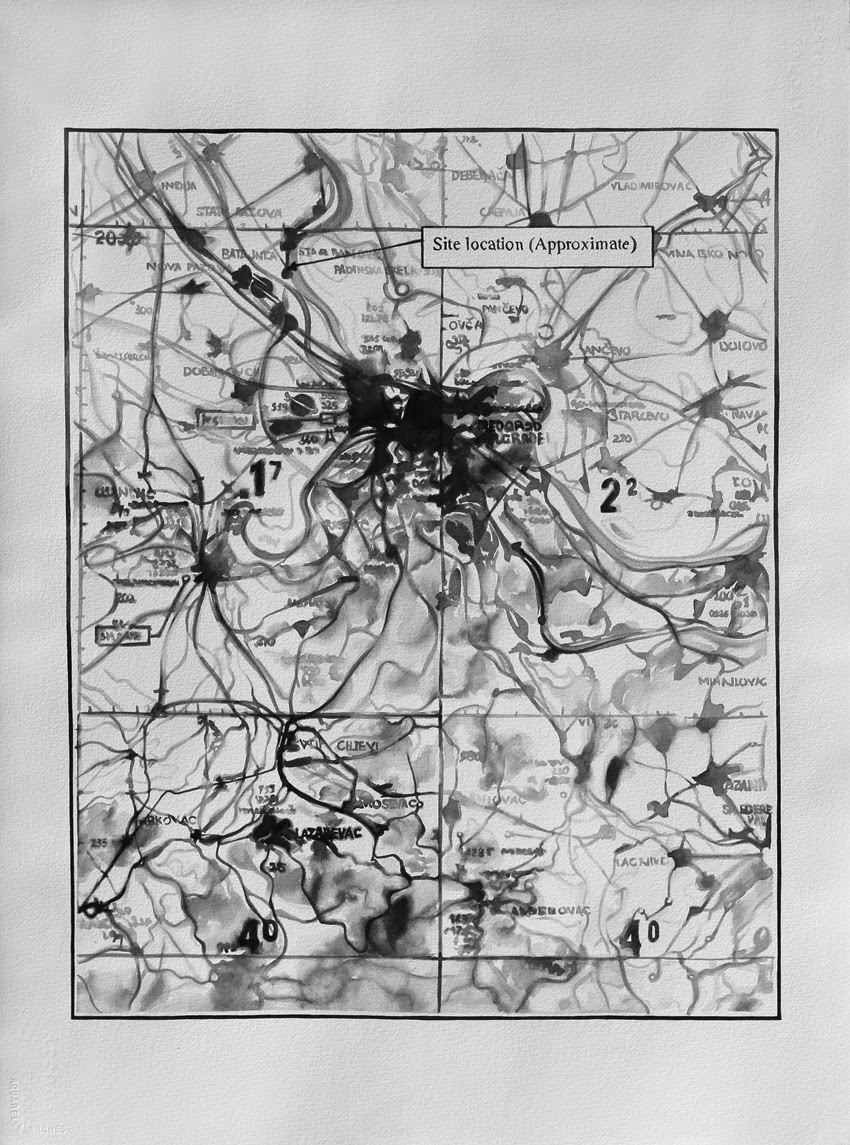 "Kninjas - Knights of Srpska Krajina" was a Serbian war-propaganda comic book that came out during the fall of 1991, during the war in Yugoslavia. It was published only two issues and the publisher was Belgrade-based daily newspaper “Politika”. The main heroes of this comic book are “Kninjas” that are fighting for the freedom of Srpska Krajina. They have folk names (Sava, Radojica, Milica, Grujica), and are represented as offshoots of Serbian century struggle for freedom, they are committed to the Serbian faith 'Svetosavlje' values ​​and patriarchal life, but at the same time, having all the characteristics of a super - comic book heroes: mafia experience in the European underground, conduct all kinds of modern weapons and Eastern martial arts, a perfect knowledge of foreign languages, the ability to disguise themselves as whatever character in whichever foreign country and to easily communicate with the most diverse world. Croats are shown as anti-Serbian hordes that are trying to destroy the Serbian race by any means. Ustasha Ante Jelic always carries srbosek (the knife for Serbs), and his comrade make plans to attack the Knin fortress, saying: "There is no mercy for the Serbs! A knife, a bullet, a rope! We need to rid of the stench of Balkan Gypsies (...). Only the dead Serbs are good Serbs. "

Kninjas, were the Serbian paramilitary unit (special forces) which participated in the war in Croatia, in the self-proclaimed Republic of Srpska Krajina, from 1991 to 1995. The first commander of the unit was Dragan Vasiljković (Captain Dragan), an Australian citizen accused of war crimes where he was hiding under the name of Daniel Sneden. Later, the unit was disbanded and it eventually formed the "Wolves", and in 1996 the "Red Berets". Kninjas fought in the region of Croatia (ex Yugoslavija) where local Serbs proclaimed autonomy first and then independent Republic, called „Republika Srpska“. The name "Kninjas" originated as a play on words or combination of words Knin (the capital of Republic of Srpska Krajina) and ninja (masked skillful Japanese fighters). 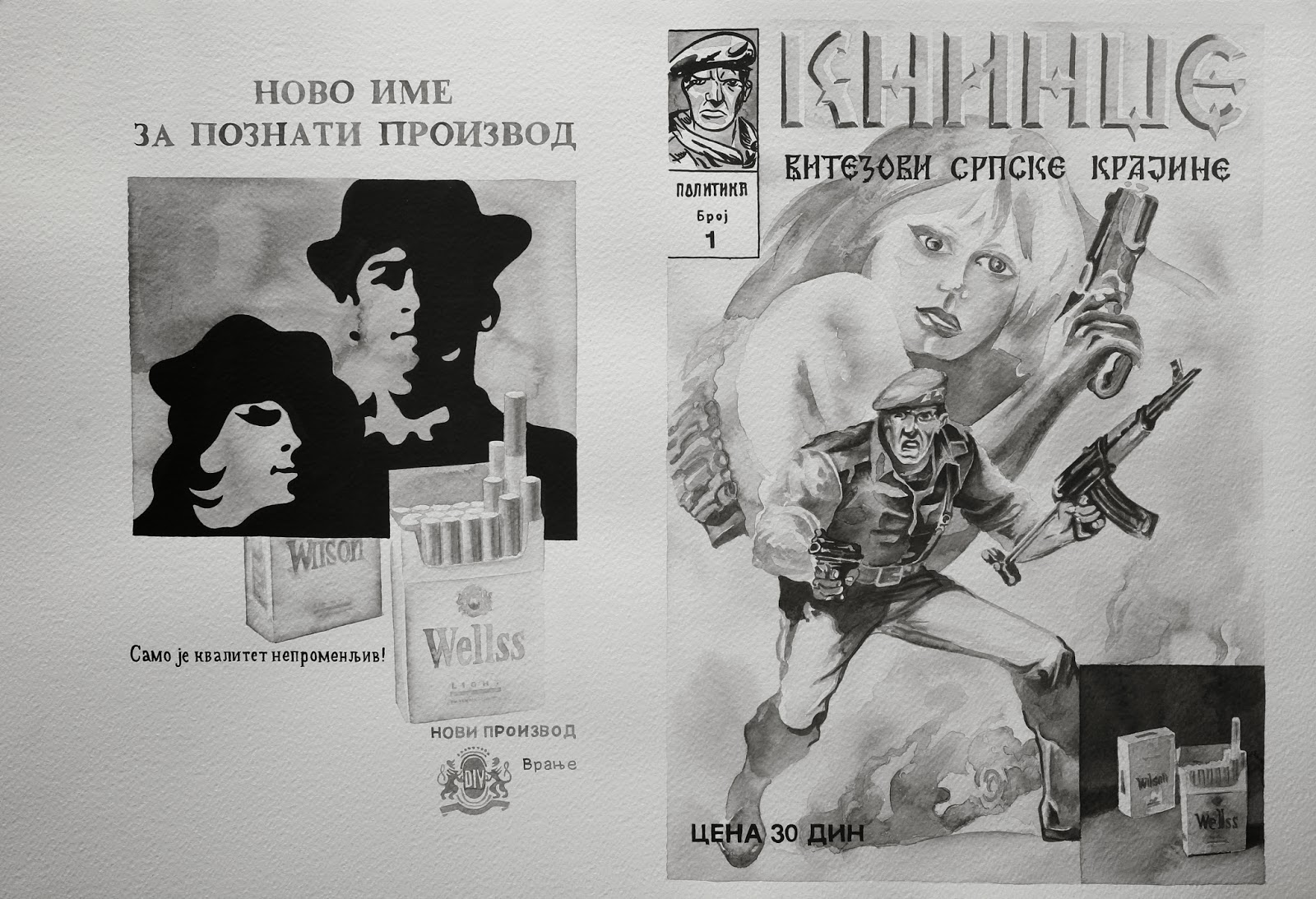 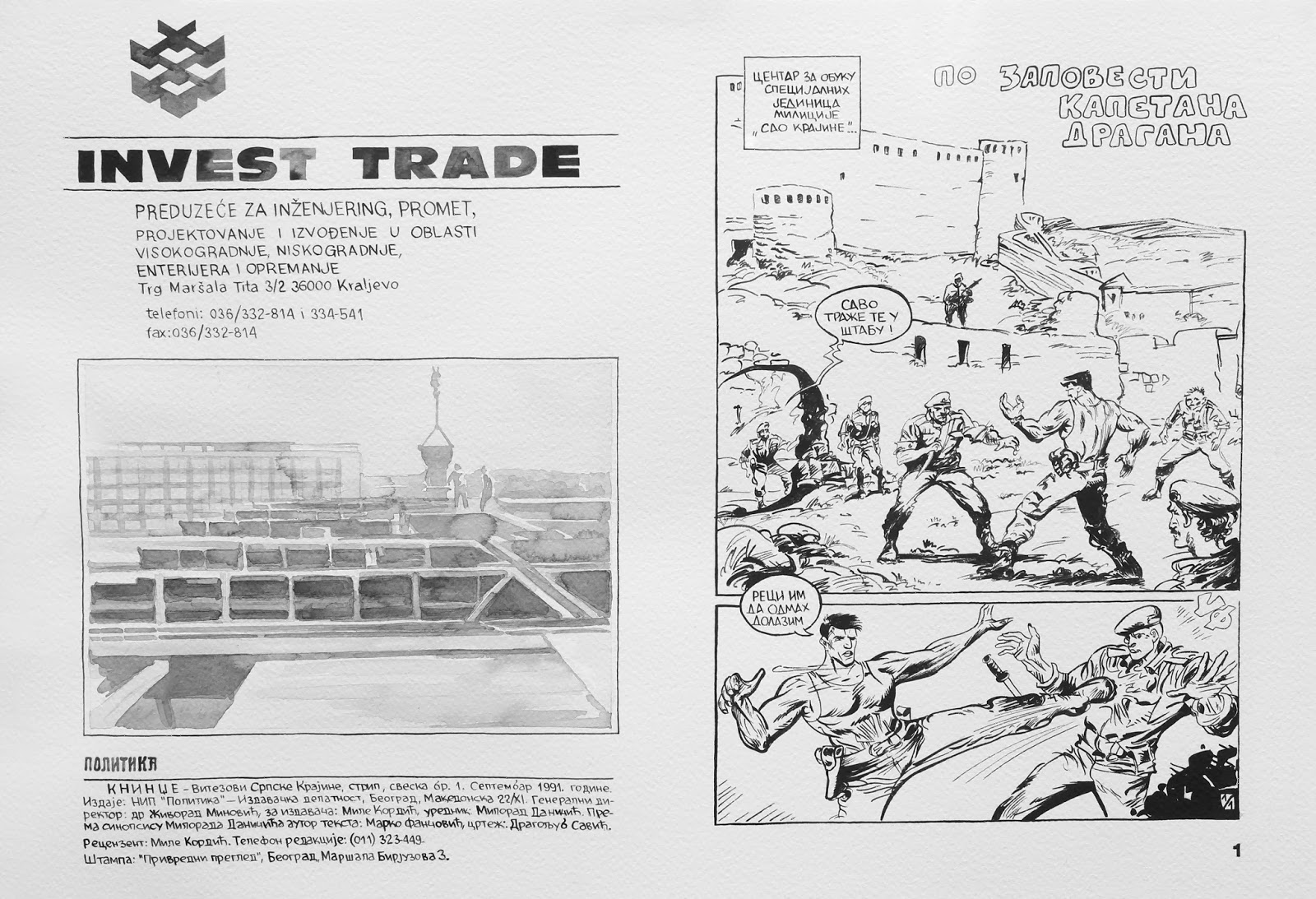 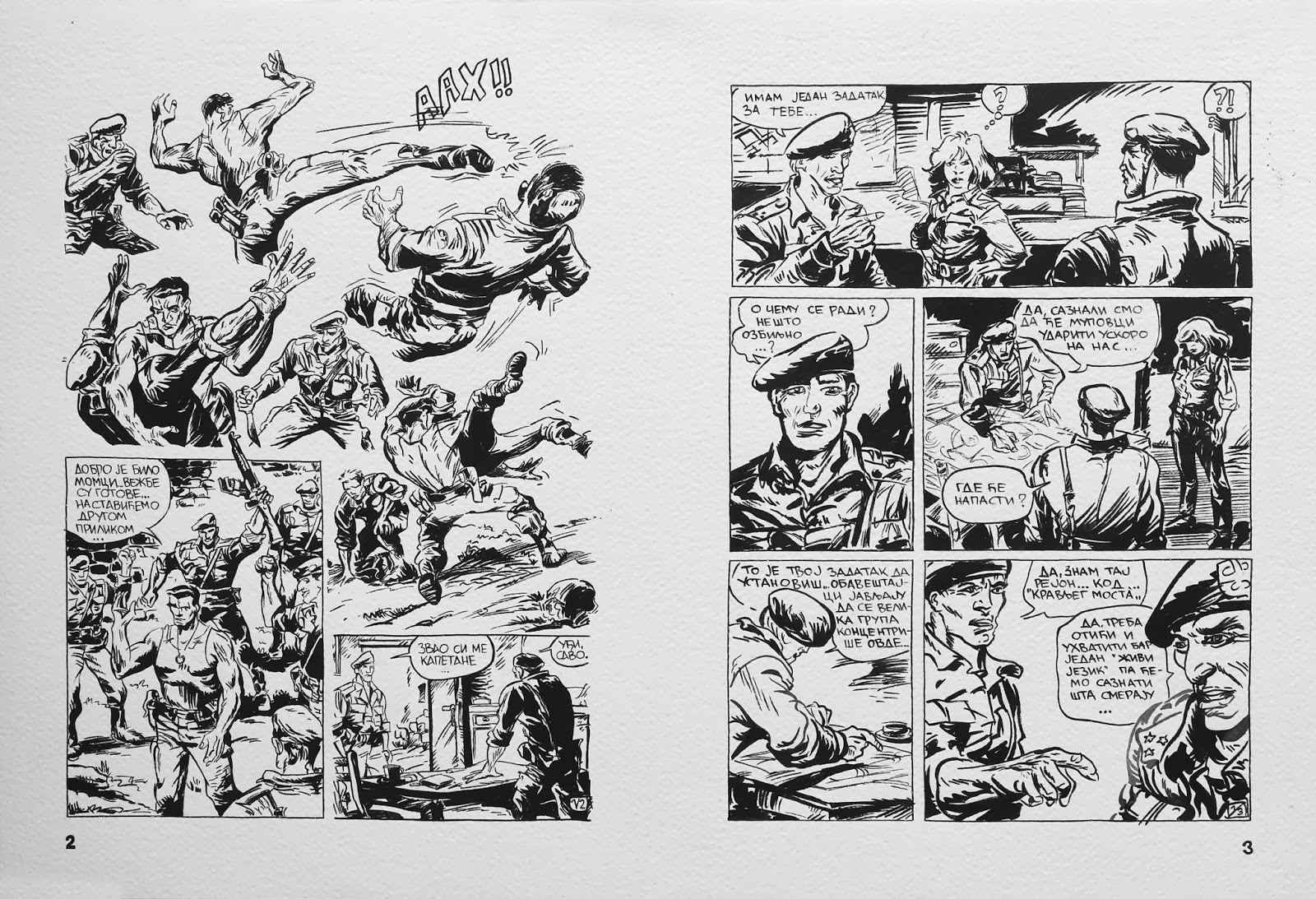 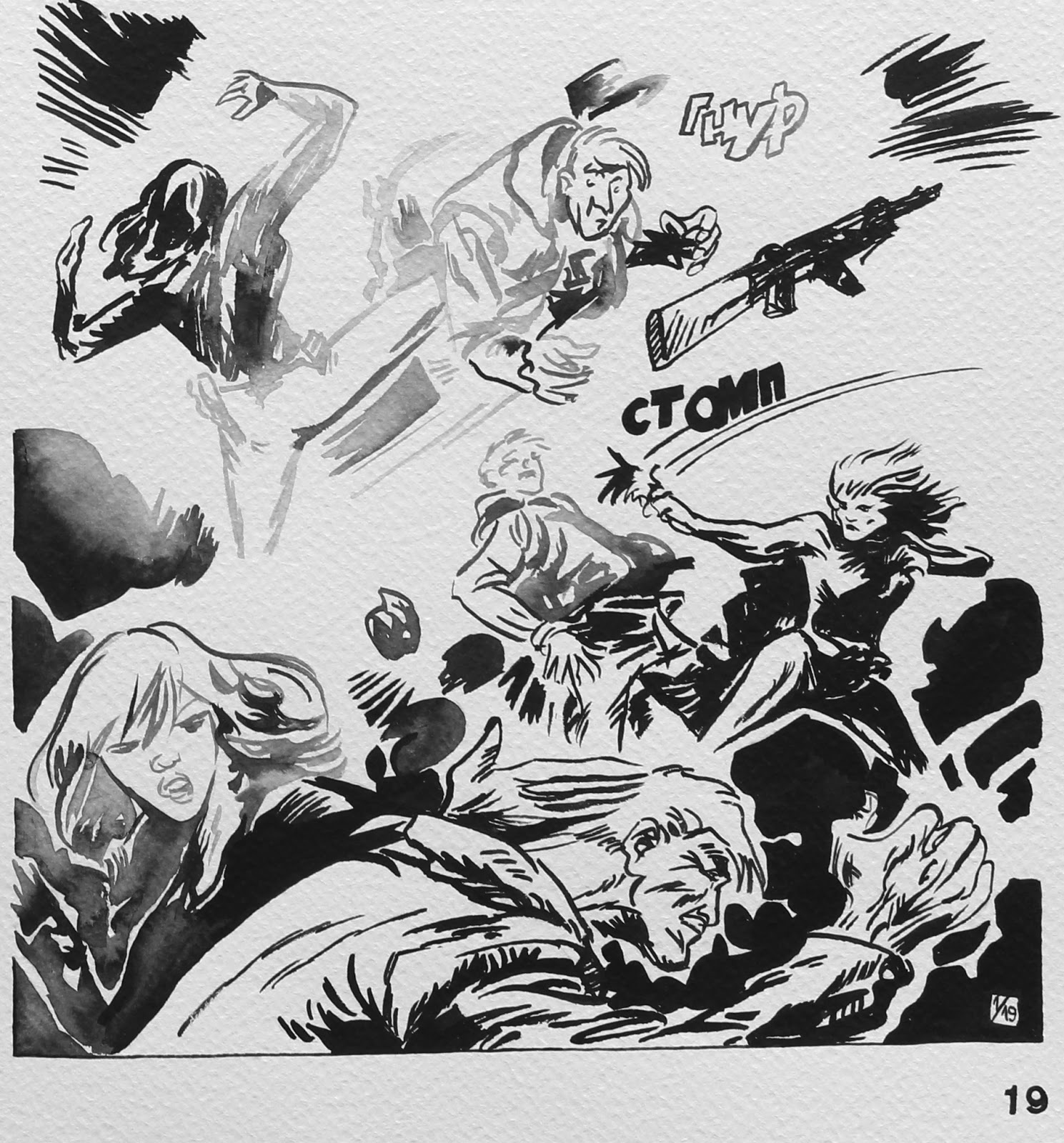 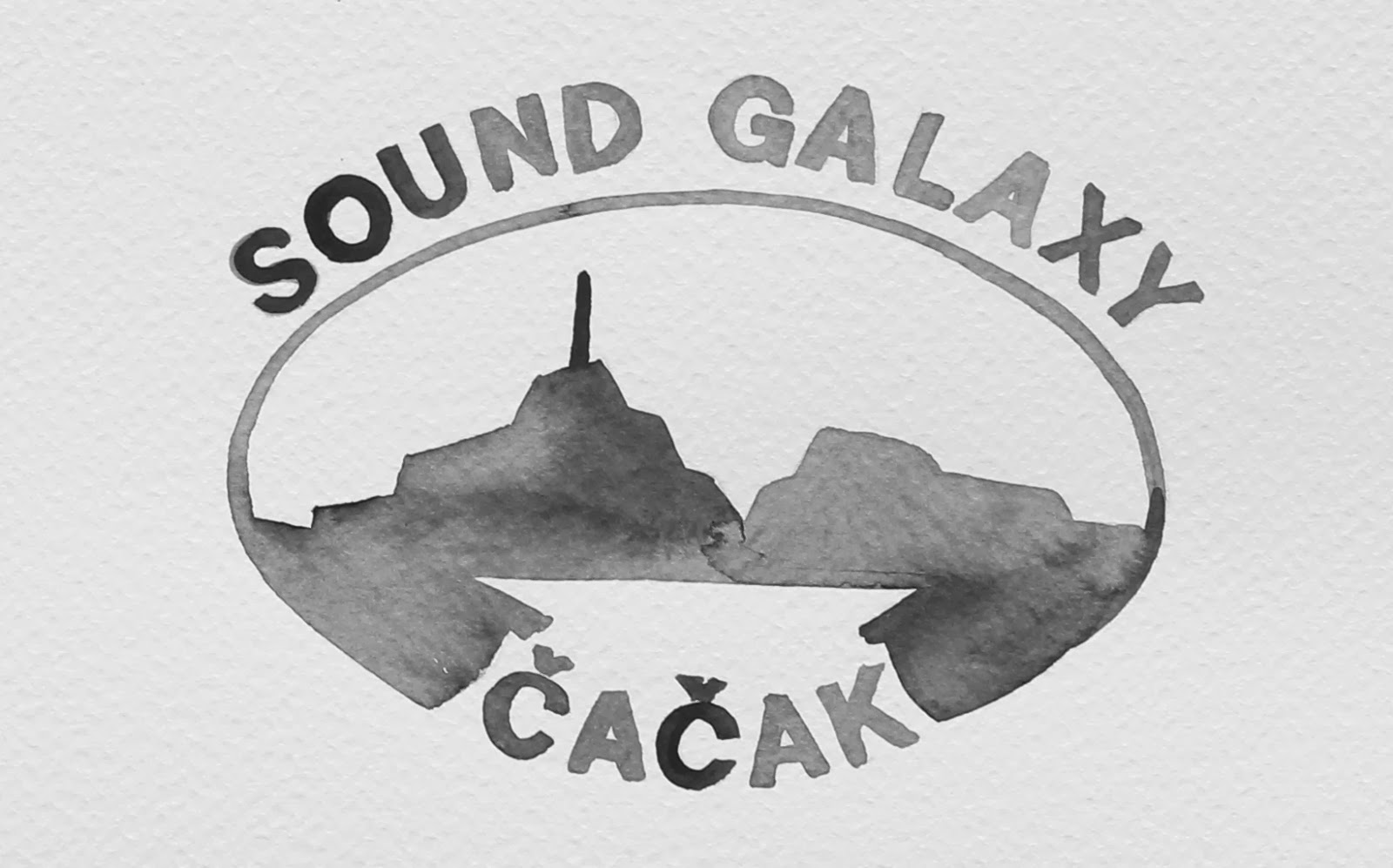 vladimir miladinovic
Graduated at the Faculty of Applied Arts in Belgrade, currently a PhD candidate at Belgrade University of Art, Interdisciplinary PhD Studies, Theory of Arts and Media. Lives and Works in Belgrade as a Freelance Artist. e-mail: hcser02@yahoo.com